Emanuel “Dupree” Jackson, Jr. is a lifelong Delray Beach resident. Passionate about his community, he became one of Healthier Delray Beach’s strongest assets. His lived experience and stature as a trusted community member helped Palm Health Foundation and the initiative’s fiscal agent create breakthroughs in engaging residents who were initially resistant to the initiative. Leadership quickly realized Dupree’s talents and potential. They invested in his professional development and supported capacity building for his promising grassroots nonprofit organization. Jackson tells his story: 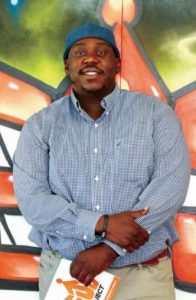 “In September 2014, I got my 501c3 and officially became a nonprofit—the EJS Project.  I wanted to create a place in my community that I wished I had as a kid: a safe place to go for support, to be around adult mentors and have leadership opportunities.  There was nothing else like it for kids and teens going through personal struggles.

At the time, I was a “kitchen table” nonprofit.  I didn’t have a location of my own and I wasn’t taking a salary.  The timing of Healthier Delray’s launch couldn’t have been better.  Just as I was getting off the ground, they were too.

I was invited to attend one of the first Healthier Delray community meetings.  Shortly after, I was nominated to the steering committee.  I wasn’t sure I was the right person.  All of these big names were on the committee from the United Way and other well-known nonprofits.  I thought, “What could I add to this?”

I didn’t know how important lived experience was.  I was amazed by how the committee members referred to me for advice.  It gave me power and made me see that I was good enough to have a leadership role.  They made me feel worthy, valued and important.

Healthier Delray also took me professionally and personally to another level.  The fiscal agent, Achievement Centers for Children and Families (ACCF), was searching for a community liaison.  At the same time, the EJS Project needed resources and credibility.  We made a deal.  I would work for ACCF for three years while running the EJS Project.  In return for building community relationships, ACCF and Healthier Delray would provide me with training and professional support to strengthen the EJS Project.

I learned so much during that time about nonprofit leadership, grant-writing and reporting.  They sent me to workshops and conferences and helped me network and gain access to organizations that could support our work.  My professional stock grew tremendously as the CEO of a nonprofit. I was respected, and I was able to practice evidence-based work.

…the biggest thing is sustainability. I hope I’m the example. After Healthier Delray is gone, I’ll still be here. I want to be a professional and serve my community. It doesn’t get any better than that.

Toward the end of my three years as community liaison, I was ready to grow the EJS Project and move on from ACCF.  I knew of a vacant building that would be perfect.  Delray Beach had provided other nonprofits with donated space for $1 a year.  I was able to get on the agenda for a commission meeting with my Healthier Delray steering committee members at my side. They spoke on my behalf, helping me secure my lease.  I could now tell parents that the EJS Project had a home.  I could finally tell kids on our waiting list that we had room for them.  And thanks to the skills and connections I developed during my three years with ACCF and Healthier Delray, I received donated iPads, a 15-person van and the resources to hire a program director.

We now provide after school programs for middle school and high school students to help them with homework and provide open conversations on sexual activity, bullying and peer pressure. Once a month we provide a Saturday community connection opportunity with a guest speaker or a field trip.  In the summer, we have programming from 8:00 a.m. to 5:00 p.m. every day to work on team building and public speaking through a partnership with a local improv group.  We’re also creating videos for the Palm Beach County Sherriff’s Office and the Department of Juvenile Justice on how bad decisions can result in a lifetime of consequences.

We’re continuing to expand and grow, but the one-on-one life changes are the most important to me.  A student came to me after missing over 30 days of school.  He was on the verge of being kicked out for the rest of year.  Once we started working with him, he became more involved with positive activities like sports and behaved better at home.  He never missed a Sunday planting trees with us.  He finished the year with a 2.8 GPA.  He just needed something to be proud of on his own.

For students like him and for me, the biggest thing is sustainability. I hope I’m the example.  After Healthier Delray is gone, I’ll still be here.  I want to be a professional and serve my community.  It doesn’t get any better than that.”

Sustainable Impact: The EJS Project now serves 250 youth per year with a mission to build and empower future leaders. Dupree follows the model he learned through Healthier Delray Beach by respecting the lived experiences of his students and giving them a strong voice in determining the programs he delivers.  He is also taking on capacity building by mentoring other nonprofit start-ups as he was mentored by ACCF.  The success of the program has attracted significant new funders, including the Children’s Services Council of Palm Beach County, the Community Foundation of Palm Beach and Martin Counties and Kayne Anderson Capital Advisors, L.P.