Engaging residents in the problem-solving process created a shift from a belief system with predetermined results to recognizing the value of social change under conditions of complexity.  Shifting power dynamics and adopting the Cynefin® framework helped us navigate this unpredictable new terrain where there are no right answers and “safe-to-fail” is the new norm.

Palm Health Foundation learned over time that we had to be exceptionally mindful of real and perceived power dynamics that were influencing the very behaviors that needed to change for community change work to take hold.  We realized early on that the most challenging power differential was our hold on the purse strings.  But how to navigate around it?  How could we shift an entire traditional foundation mindset from “our grant dollars” to “your grant dollars” and from “we know best” to “you know best?”

FSG’s “The Water of Systems Change” became the foundation’s North Star, guiding leadership to change their own ways of thinking and acting and advancing equity throughout the initiative. 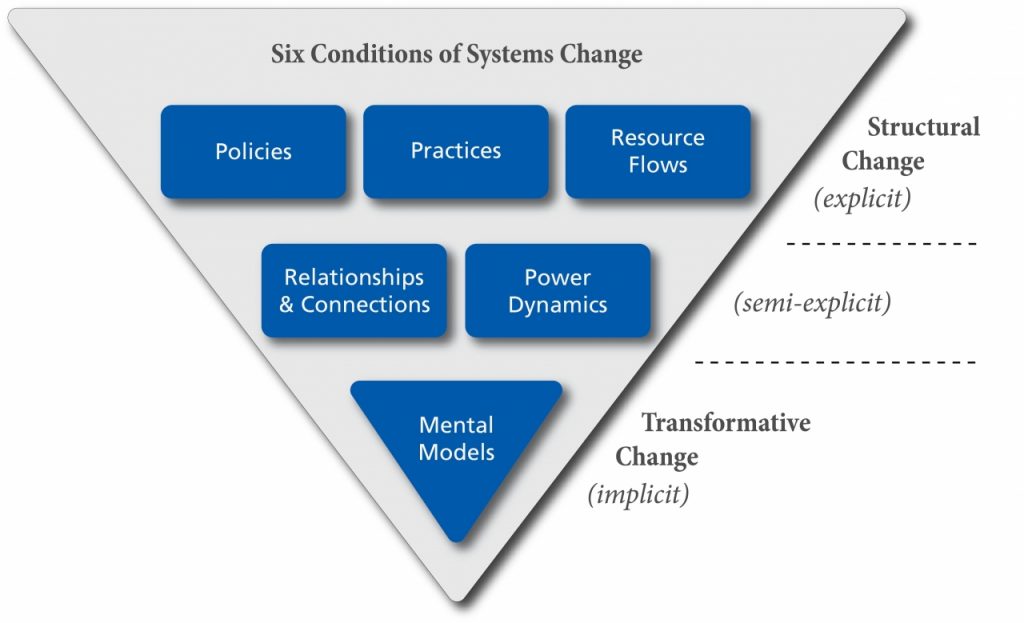 Leadership was very comfortable working in the explicit space of structural change from a history of funding grants that directed resources toward improving nonprofit programs and services and affecting policy.  Working within semi-explicit conditions, where power dynamics reside, and implicit conditions that affect power dynamics, was where the learning needed to happen.  These are defined by FSG as:

Three factors emerged as critical to shifting power dynamics and breaking down the barriers to create relational and transformative change:

They were the three factors that aided in embracing the Cyenfin Framework.

Created by Dave Snowden in 1999, the Cynefin Framework is a conceptual framework used to aid decision-making.  Pronounced “kuh-nev-in,” it is a Welsh word that signifies the multiple factors in our environment and our experience that influence us in ways we can never understand.

The foundation migrated from the “chaotic” to the “complex” category and adopted a “probe-sense-respond” methodology to discovering health issues from the residents’ frame of reference.  Consultants working with the foundation introduced a sensemaking framework for community meetings that relied heavily on drawing the voices of the community to the table and exploring their health challenges in an open dialogue. Pre-determined notions were abandoned and eye-opening interpretations of how health issues were defined by residents emerged. 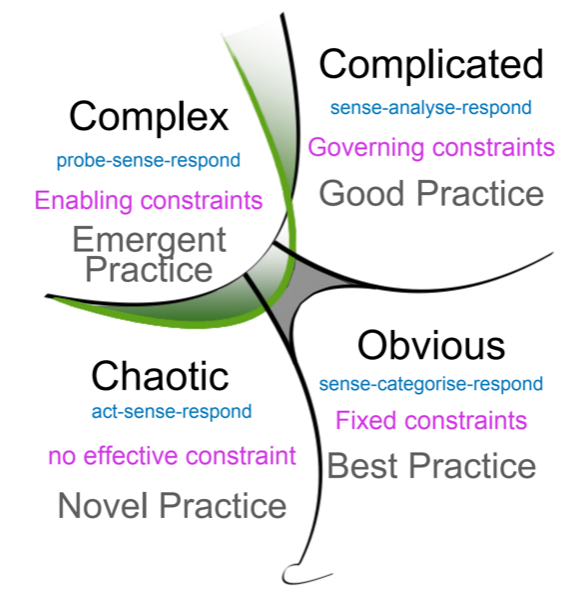 Complexity requires abandoning the constraints of best practices as a baked-in solution and accepting that there are myriad ways of looking at root causes, symptoms and what a good outcome might look like.  The process is instinctual and gives everyone involved the ability to share perspectives from their points of view and accept that there is no one way to solve a problem.

Embracing emergence put everyone on the same baseline.  The residents saw that the foundation did not have the answers and they weren’t there to impose a solution on the community. It was difficult for the foundation to let go of the known and move into the unknown in the early stages, but as the work progressed, leadership shared their vulnerabilities with the residents, allowing the residents to see that this was not an “us vs. them” initiative, it was “we.”

As one example, when Healthier Lake Worth Beach’s project director first probed residents for which of the three foundation health priority issues they wanted to adopt—diabetes, behavioral health or family caregiving—she was dumbfounded by what she heard.

“Having worked with the community’s families and children for eight years, I was so sure that Lake Worth would choose diabetes.  I see so many kids who are overweight, residents who are diagnosed with high sugar levels and so many people taking medication for diabetes. But they chose behavioral health.  When we probed for the issues they saw as behavioral health, they cited homelessness. Prostitution. The SWAT teams in certain neighborhoods two or three times a week. The dirtiness and the trash, the drug deals, the gangs, the crime. I never saw these things as affecting behavioral health and social/emotional welfare. But they were right there, right in my face. It was a lesson learned for me that social determinants can be common ground.”

The Healthier Lake Worth Beach experience was just one that guided the foundation toward the social determinants of health— health-related behaviors, socioeconomic factors and environmental factors that are estimated to account for 80-90 percent of healthy outcomes for a population.

The Healthier Together initiative is grounded in Complex Adaptive Systems Thinking and has adapted the following flexible rules that challenge mainstream organizational approaches. As each Healthier Together community evolves and develops its own localized resident-led networks, these rules of engagement are beneficial to achieving the changes we want to see: