Healthier Together project directors became catalysts for uniting the voices of residents with people holding positions of power. They often became navigators and facilitators to create relationships and connections where everyone could share in positive outcomes. Ricky Petty, Healthier Boynton Beach project director, shares one example. 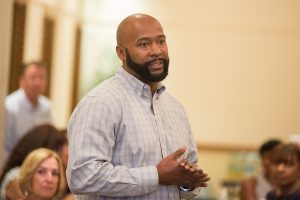 The residents reached out to me to see what I could do, so I reached out to the city manager and scheduled a meeting between the residents and the city. I could see that there wasn’t clear communication and there were misunderstandings on both sides.

The residents didn’t know that the park was planned for renovations. The city wanted to understand how the residents could help keep the park safe while having the basketball game.  They came together with mutual agreements to support one another with the relationship extending to the Boynton Beach Police Department whose officers were invited to participate in games. The group of residents has now evolved into an organization called “Boynton Strong” and they are looked to for ways to engage residents in the community to stem violence and help those that are in need in the community. Their impact has grown tremendously and they are doing backpack drives, food distribution and other charitable acts to support Boynton Beach, involving more youth and residents than the city ever could on its own.”

Sustainable impact: Boynton Strong continues to grow and make an impact in the Boynton Beach community. The group established itself as a 501c3 and have created a reputation for capturing the attention of community leaders. They have a presence at commissioners’ meetings as well as in the hard to reach areas of Boynton Beach where they represent the voice of community concerns. “Peace in the Hood” basketball tournaments hosted by Boynton Strong are played every week without any gun violence. The group continues to support the community through programs to feed children and seniors, cancer walks for community survivors and events to promote economic mobility.

Charity In The Time Of COVID – Special Report: How Local Nonprofits Are Surviving The Pandemic.
The Boca Raton Observer