When Healthier Neighbors was in its infancy, a tragedy rocked the West Palm Beach/Riviera Beach community to its core. On the night of October 18, 2015, Corey Jones, an African American man, was shot and killed by a plainclothes police officer, Nouman K. Raja, while waiting by his disabled car on a highway exit ramp. Raja falsely claimed to investigators that he had identified himself as a police officer and shot Jones in self-defense. Both assertions were disproved, and Raja was found guilty of manslaughter and sentenced to 25 years in prison. Jones was 31 at the time he was killed. He worked at the Delray Beach Housing Authority and part-time as a drummer. He played in a band at his church where his grandfather is a bishop and graced many local churches with his talent. The anger in the wake of Jones’s shooting was erupting throughout Palm Beach County. Project director Jeanette Marshall shares how Healthier Neighbors took a chance on bringing residents and police officers together to open a healthy dialogue with a group of service providers and residents who claimed the title, “The Keep Calm Crew:” 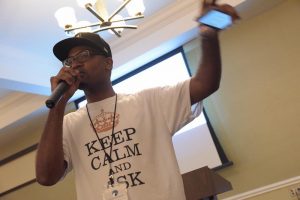 “Healthier Neighbors’ Facebook follower, Marvelous Washington, started asking us, ‘What can you do?’  The residents who were beginning to get involved with the initiative were focused on behavioral health, driven by the crime and the many shootings—mostly of young black males—that they saw occurring across the country and now were happening in their own community. We knew we needed to act.

I contacted the foundation’s vice president of grants and community investments asking for the resources and monetary support to host an information session that would bring local police officers together with residents.  The VP had only one question: ‘Is that what the community asked for?’  When I told her it was, she said, ‘Then that’s what we’ll do.’

Over 100 people attended the standing-room-only session. After seeing other community meetings erupt into arguing matches, we took great care to de-escalate heightened tensions and create an environment that made officers and residents feel they were all working together. ‘Keep Calm and Ask’ t-shirts were created by the ‘Keep Calm Crew’, and a young African American mental health professional, Mathew Jean, LMFT owner and founder of Beach Stone Counseling, talked about coping with anxiety and PTSD.  A warm meal was provided while attendees watched an episode of Blackish that dealt with Black Lives Matter movement followed by a panel discussion with public defenders, police and residents.

Residents and police officers talked to one another and shared their feelings openly about the Jones tragedy.  In the end, the community had an ask for the West Palm Beach police officers: ‘help us understand what to do if we are pulled over by the police.’  The police created an informational brochure that was shared during a second information session and distributed throughout the community.

It was a huge catalyst for Healthier Neighbors.  It said to residents, ‘We asked for something and you gave it to us the way we wanted.’

It was also an opportunity to create relational and transformative change by bringing together police with residents in a meaningful way, putting residents in a position of authority by telling the police what the community needed and changing the narrative by understanding each other’s beliefs and assumptions.  The event and its outcomes were so meaningful that the Palm Beach County Criminal Justice Commission replicated the session to bring to other communities.”

Sustainable Impact: Healthier Neighbors, recognized for its ability to lead change, is facilitating and helping to implement the health component of The Mayor’s Village Initiative, a City of West Palm Beach effort to prevent and reduce youth violence and improve outcomes for young African American males 25 years old and younger living in three neighborhoods disproportionately impacted by violence, crime, and social/ economic disadvantages. Healthier Neighbors will champion the health pillar in the mayor’s plan to: 1) locate current resources and gather an inventory of services provided in the community; 2) redefine health in the African American community based on resident input; and 3) ensure community healthier behaviors include a cultural competency lens.