Healthier Lake Worth Beach (HLWB) launched in 2017. After two years of struggling to determine what their focus would be, they landed on behavioral health as the residents defined it. Their definition evolved into HLWB’s mission: “To improve the cleanliness, environment and safety of Lake Worth Beach neighborhoods and promote healthy behaviors that impact the overall health and well-being of our residents.” It would be a mission that influenced policies in neighborhoods and city government. The Whispering Palms neighborhood is one example, as told by project director Carmelle Marcelin-Chapman: 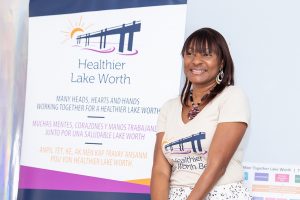 “Whispering Palms is the first Lake Worth Beach residential neighborhood that you see when exiting at Lantana Road off the interstate and heading north on Dixie Highway.  As recently as six years ago, there was a SWAT team there two or three times per week. The local residents had seen it go from a nice neighborhood to an area run by gangs and drug dealers.

People felt hopeless. Their neighborhood association was defunct. The streets and alleyways were filled with trash.  Everywhere you looked was a public health nuisance. The residents talked about how it caused stress and affected their mental and emotional well-being.

A lot of people walk in the community. They wanted cleaner streets and a greener Lake Worth Beach. When we used sensemaking, the residents said that if their streets were cleaner and the physical appearance was better, it would attract less crime, increase family activities, and foster neighborhood pride.

We looked to the leaders of the community—the stakeholders, including pastors and small business owners—to help us reach more residents. At a community churches revival, we were invited to talk about HLWB and to discuss what we could do collectively. They emphatically told us, ‘We are going to take our neighborhood back!’

Longtime resident leaders and pastors reinstituted the Whispering Palms Neighborhood Association and at their first meeting invited Healthier Lake Worth Beach to help identify problems, find solutions and support residents in their efforts.  We explained that we weren’t there to decide what was best for their community. They needed to tell us what they wanted to do, and we would use our assets to help them to achieve it.

The association decided to hold a neighborhood cleanup with guidance and resources provided by Healthier Lake Worth Beach. Over sixty people came.  Pastors, city commissioners and other neighborhood associations were there.  The Solid Waste Authority provided free grabbers, bags and gloves. Someone came forward to give a motivational speech as we kicked off the cleanup.  They have held a monthly cleanup ever since.

Since then it just grew and grew.  The neighborhood decided to start an “Adopt-A-Street” program where each church located within the neighborhood will adopt their street address and keep it clean. The association presented their idea at a city commission meeting. The City of Lake Worth Beach took notice and embraced their first Adopt-A-Street program—something they never had done before. Now there are signs throughout the Whispering Palms community that show the names of the churches that take care of the streets.

The association decided next to create a crime watch program.  Citizens got the local sheriff’s office and the city’s public works department involved and asked for guidance and signs. But they needed money to pay for them. Healthier Lake Worth Beach paid for the signs and the city agreed to install them—18 in all, one at each street entrance to the neighborhood.

Two massive tree planting events with over 100 residents participating added to the beautification of the neighborhood and its walkways and park. The streets became cleaner, greener and safer.

Whispering Palms is on its way to becoming a great family neighborhood again.  It has all the assets—a park, soccer field, indoor basketball court, daycare, teen program, Head Start and community center and is now in consideration to become an Opportunity Zone.

The local sheriff’s office took notice of the residents’ desire to change the neighborhood and came on board with a $1.3 million grant they received from the Department of Justice to reduce violent crime, with a focus on the south end of Lake Worth Beach which includes Whispering Palms.  Recognizing that Healthier Lake Worth Beach is a conduit to the community and its residents, the sheriff’s office reached out for our support.  Now we have a seat on the implementation team with the sheriff’s office and are part of their leadership council in a collaborative effort to reduce violent crime.  Our partnership is a major win to affect policy and we can see how safety is a big focus area for us and its tie to behavioral health.

On a broader scale, residents are now going to city commission meetings and advocating for things they want for their neighborhoods. They have learned how to become a voice for their community and the city has learned that the residents are valued resources for making change that matters.

This work requires a lot of patience and listening. You have to say what you mean and mean what you say.  There cannot be any hypocrisy. Residents and stakeholders are watching you. You have to keep showing up, listening and validating the work with the people who are welcoming you. There is now great trust. It takes a long time, but once you have it, you have to maintain it by constantly educating people about what the Initiative is about.

It’s the only way to make an impact that lasts.”

Sustainable Impact: Healthier Lake Worth Beach started with creating a cleaner, greener environment to promote a positive outlook, increase pride in where residents live, decrease crime and encourage children and adults to go outside and enjoy their neighborhood. The initiative is now recognized by the city as the go-to for improving quality of life, contributing to greater behavioral health and wellness for all. In addition, small grants and sponsorships provide community organizations with the resources they need to increase capacity and efficiency of existing programs or serve as a catalyst to fund new projects that align with HLWB and the community’s priorities. These include food insecurity, increasing youth literacy, access to sports/outdoor activities for youth, increasing youth resources and reducing the perceived stigma around addiction and mental health.