One of Palm Health Foundation’s first Healthier Together communities was Jupiter, Florida. Launched in 2014, it became a case study for authentic community participation and how the foundation built trust through “mini-grants,” a way for all to become local stewards of shared resources. Lynn Hays, long-time Jupiter resident and first steering committee chair of Healthier Jupiter, shares her perspective: 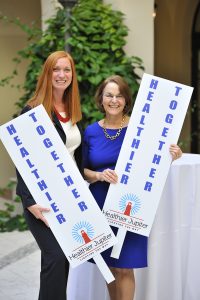 “Palm Health Foundation was taking a chance on a place-based initiative and wanted to learn along with us. They were the neutral third party at the table among a diverse group of residents, dedicated nonprofits and municipalities trying to figure out how we could move our community forward to benefit everyone.

As one of the first Healthier Together communities, we struggled for clarity at the beginning of the process. None of the foundation’s three issues was at the top of the list of health concerns for Jupiter.  We chose diabetes but felt that the foundation’s initial goal of a 5% reduction in five years among our populations was unachievable. And we weren’t clear on the target population—we are a diverse community of retirees, young families and migrants and an unincorporated area of African American residents.

The team voiced their concerns. We felt that all the aspects of diabetes prevention management—healthy eating, exercise, access to care—were a platform for a healthier community in general. As we worked with the foundation, they became more flexible and open to assessing what the community needed and wanted.  We looked at healthy lifestyles across the lifespan and transformed the initiative over time to one that had universal appeal for all residents to live their healthiest best lives while integrating our own local resources to develop solutions.

We landed on “mini-grants” to support healthy eating, physical activity and access to care.  Small nonprofits and individuals with great passion but limited funds applied for $2,500 grants. We provided mentoring and grantwriting workshops and support and a platform to network and collaborate. By our third year, we had an outpouring of involvement from the community with over 400 people attending our event where we announced the mini-grant recipients.

The measures weren’t so much moving the needle on diabetes, but having the organizations support each other so that all the social determinants of heath were improved for the most vulnerable in our community.

The mini-grants have created an incredible ripple effect for collaboration, high resident engagement and improving the health and grassroots systems within the community.

One example is Palm Beach Harvest, a food rescue organization. Their first mini-grant funded a community garden to help feed children at a pre-school that served a minority population.

It was a huge success for the school and led to a connection between Palm Beach Harvest and El Sol, an organization serving day laborers and their families. Now El Sol is a drop-off point for their food rescue and adds to the food pantry supplies. The mini-grant for Palm Beach Harvest also served as a trajectory for greater investment.  A community member learned of the organization through the increased exposure the mini-grant created and helped them secure a $11,000 grant to pay off the loan on their truck and purchase a second, doubling their reach.

The grants are funding pilot ideas that will improve our collective community health and paving the way for other funders to contribute.  I understood from the beginning that no individual projects with the funding we had would produce significant results.  But they would be a force to bring together the organizations in the community for greater collaboration to achieve a heathier community. The measures weren’t so much moving the needle on diabetes, but having the organizations support each other so that all the social determinants of health were improved for the most vulnerable by sharing our local resources.”

Sustainable impact:  Large Palm Beach County funders are now looking at investing in Healthier Together mini-grant recipients.  They have recognized community members as an important part of the vetting process and as leaders of funded initiatives.